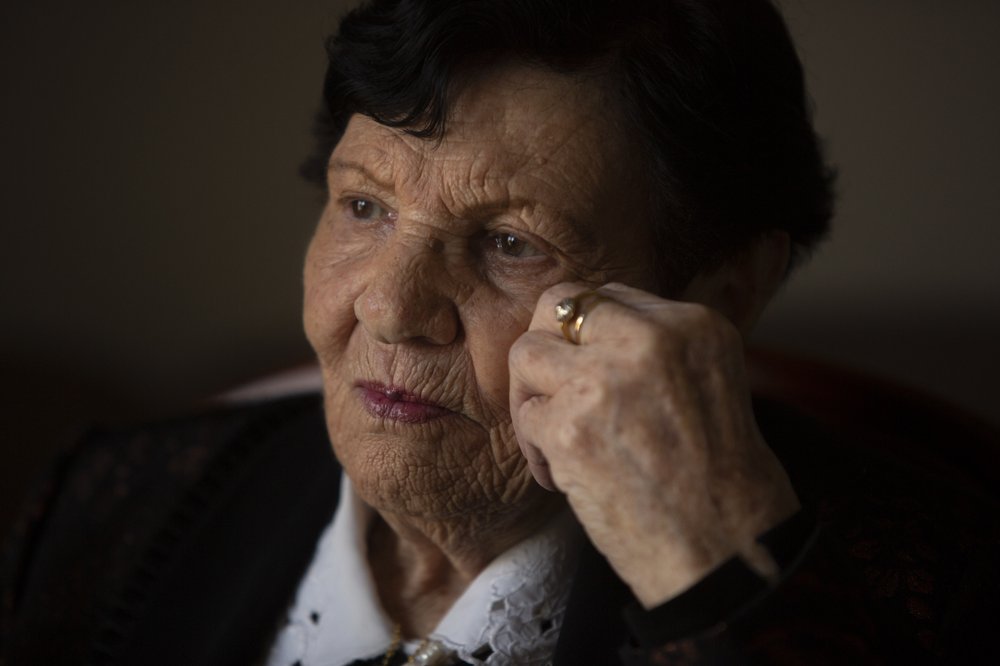 JERUSALEM (AP) — As the world commemorates the anniversary of the liberation of Auschwitz on International Holocaust Remembrance Day Sunday, death camp survivor Cipora Feivlovich marks her own personal milestone as she turns 92.

Feivlovich has spent her most recent birthdays recounting to audiences in Israel and Germany her harrowing experiences in the camp, where her parents, brother and best friends all perished.

Despite witnessing daily atrocities and fearing that the toxic food and injections she was given would make her infertile, she eventually married her husband Pinchas, a fellow orphaned survivor, and started a new family. Today she has dozens of grandchildren, great-grandchildren and great-great-grandchildren.

“When we first met after the war he asked me if I thought I could have children after everything I went through in Auschwitz. And I said ‘I don’t promise anything. What the Lord gives is what will be,’” she recalled from her home in Jerusalem. “We understood each other. He always said he was lucky to marry me since I understood him.”

But for the following decades, as he obsessively wrote and lectured about his six-year Holocaust ordeal in multiple concentration camps and the trauma of losing eight siblings and his entire extended family, she kept quiet to try and raise their three children in Israel in relative normalcy. Only in the 1990s, long after the kids had moved out, did she finally start processing her own troubled history.

Six million Jews were killed by the Nazis and their collaborators during the Holocaust, wiping out a third of world Jewry. Israel’s main Holocaust memorial day is in the spring — marking the anniversary of the Warsaw Ghetto uprising. The United Nations designated Jan. 27 as the annual international commemoration, marking the date of Auschwitz’s liberation in 1945, the day Feivlovich turned 18.

She grew up in a Transylvanian village with a large Jewish population and lived a normal life until she was 14, when she and the other Jewish students were kicked out of school.

She said her family holed up in their home for the following years, fearful of their anti-Semitic neighbors, and naively waited for the storm to pass. But then the Nazis arrived in 1944, took them away in the middle of the night and crammed all Jewish residents into the local synagogue.

“Two days we sat on the floor, you couldn’t leave for the restrooms so people relieved themselves where they are sitting,” she recalled. “On both sides of the street the non-Jews were standing and clapping their hands saying: ‘Bravo, we are getting rid of the Jews.’”

After a brief stay in a Hungarian ghetto, they were deported on the three-day train ride to Auschwitz, with each cattle wagon packed shoulder to shoulder.

“My grandfather died there while standing. We couldn’t even lay him down. And in that miserable state we got to our final destination,” she said. There, they were greeted with barking dogs, screams and a warning: “Young mothers, hand your babies to grandmothers or aunts and maybe you will live.”

Feivlovich and her younger sister were thrown to one side, the boys to the other. They never saw their parents again.

The girls were ordered to strip. Their hair was cut and they were hosed with freezing water and marched outside naked, shivering with cold and shame.

“The Nazis are teasing us, spitting on us and watching us there miserable,” she said.

After finally getting dresses to wear, they were approached by a tall man in a polished uniform who introduced himself as Josef Mengele, the notorious Nazi doctor. He pointed to a huge chimney spewing thick black smoke and told them anyone not essential to the Third Reich would go straight to the crematorium.

“I’m holding my sister’s hand, and we are shaking and crying and I ask: ‘Is this possible?’” she remembered.

Starved and exhausted, she and hundreds of other Jewish prisoners were presented with a large liquid-filled barrel.

“The moment we took that first sip in our mouth, everyone started screaming insanely. It was like a million pins in your throat. You couldn’t swallow the soup,” she remembered. “But we learned to drink that poisoned soup since there was nothing else to eat.”

She said they were told it was laced with toxin to help kill off the Jewish race and prevent it from reproducing. Feivlovich said she believed it since she stopped menstruating for a long time after.

Those already pregnant faced an even worse fate. In one case, a pregnant relative named Sarah was not allowed to go to the infirmary and forced to give birth on the floor. Usually, the Nazis took Jewish newborns away, never to be seen again. But in this case, they ordered the mother to drown her own baby in a pail of water.

By the time Auschwitz was liberated, she had already been transported to forced labor in a German armament factory. Even there she wasn’t safe. The camp commander ordered her to receive a mysterious injection for talking back and refusing to make the Christian sign of the cross on herself.