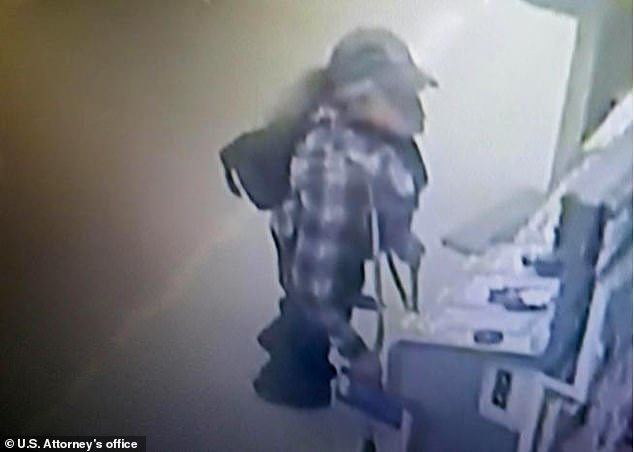 A former hippie who left a homemade bomb outside the police station in a Colorado mountain town has been sentenced to 27 years in prison after a judge ruled it was an act of terrorism even though the device never exploded.

David Ansberry pleaded guilty to leaving the device containing the unstable chemical compound HMDT, a peroxide-based compound that has been used by al Qaida terrorists, in a duffel bag outside the station in a strip mall in Nederland on October 11, 2016.

The bomb meant as retaliation for the decades-old murder of Ansberry’s friend Guy Goughner, who was fatally shot by the town marshal in 1971.

Ansberry was spotted on surveillance video when he bought the phones he used for the device and was easily recognizable because he was only 3 feet 6 inches tall and using crutches because of the brittle bone disease he has suffered from since birth.

On the eve of his sentencing Friday, Ansberry, now 67 and in a wheelchair, argued that he never meant for the bomb to go off – but the judge didn’t buy it.

US District Judge Christine Arguello on Friday said the device was not a hoax and dozens could have died had Ansberry been successful in his attempts to detonate it remotely using a cellphone.

The 27-year sentence was the minimum that could have been handed down after Arguello sided with prosecutors in treating the crime as terrorism, which dramatically increased the sentencing range.

‘[Ansberry] is a sophisticated, calculating, and culpable offender who risked killing public servants indiscriminately to indulge his 40-year-old grudge and send a message to police,’ prosecutors wrote.

The defendant had been linked to a radical hippie group known as STP, or the STP Family, which was reportedly once based in the mountains outside of Boulder and known to be violent.

Ansberry’s comments before the bomb was left, including in his journal were enough to convince prosecutors and the judge that he’d built the bomb to seek retaliation.

Ansberry argued that he was merely trying to draw attention to police shootings generally.