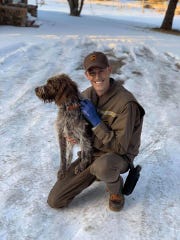 A UPS man recently braved an icy pond to rescue a young dog trapped in the ice.

Ryan Arens was on his route shortly before Christmas when he rolled up to a house in the Johnson Road/19th Street area and heard a dog in distress.

“This dog was screaming and crying and going crazy,” he said.

The sun was nearly gone, and he didn’t see anything. He delivered the package and drove to the other side of the pond.

An older man was in a rowboat on the pond, trying with little success to chip away the ice to reach the dog.

“I stripped to my boxers and got the guy out of the boat. Then I slid the boat out onto the ice, using it to distribute my weight,” Arens said. “I shimmed out to where the ice was thin.”

Then he crashed through the ice, falling from the boat and into the 16-feet-deep water.

Since he was already wet, Arens swam for the dog.

“She was starting to go under,” he said.

He grabbed her collar and swam for the ice, sliding the dog across the ice to shore. He pulled himself out of the water and a bystander handed him a blanket.

“We took the dog inside the older guy’s house and got in the shower together to warm up,” he said.

About then the sheriff’s department and animal control arrived. Help was on the way, but “I knew someone had to get to her. She wasn’t going to make it.”

Despite his adventure and cuts on his leg, Arens finished his route, twenty more packages delivered.

“Animals are my weakness,” he said. “It was the highlight of my 14-year UPS career.”