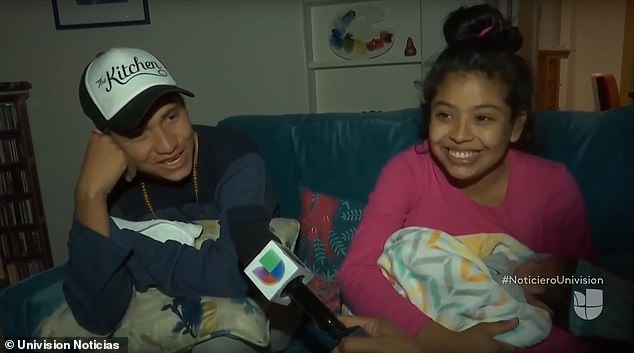 She has her anchor.

A 19-year-old Honduran woman who wanted to give birth to her second child in the United States had a son within 24 hours of climbing the border wall.

Maryury Elizabeth Serrano-Hernandez, 19, went into labor November 27, less than 24 hours after she climbed over the border fence in Tijuana with her husband, 20, and two-year-old son.

She is believed to be the first member of the migrant caravan to give birth after crossing to the U.S. to seek asylum.

Serrano-Hernandez and her family were detained by agents from the Imperial Beach Station in San Diego County on November 26.

A spokesperson with the U.S. Customs and Border Patrol agency told DailyMail.com: ‘The woman, who was eight months pregnant, began complaining of abdominal pain Tuesday and was immediately transported to a local hospital by Border Patrol agents.’

Her husband, Miguel Ortiz told Telemundo San Diego that immigration officials tried to place handcuffs on the mother while she rested on the hospital bed moments after she had been brought out of the operating room but nurses resisted the attempt.

Nurses also held a fundraising collection but once Serrano-Hernandez and her family returned to the detention center, their property was confiscated.

‘They got him pampers, wipes, clothing, a coat. All of that stuff,’ she said. ‘But they [the nurses] told me that they couldn’t confiscate the clothes and the pampers because that’s what a baby needs the most.’

The family of four was released from the immigration detention center on Sunday night and are being housed by a family before they can move to Columbus, Ohio where they will continue their asylum proceeding at a court.