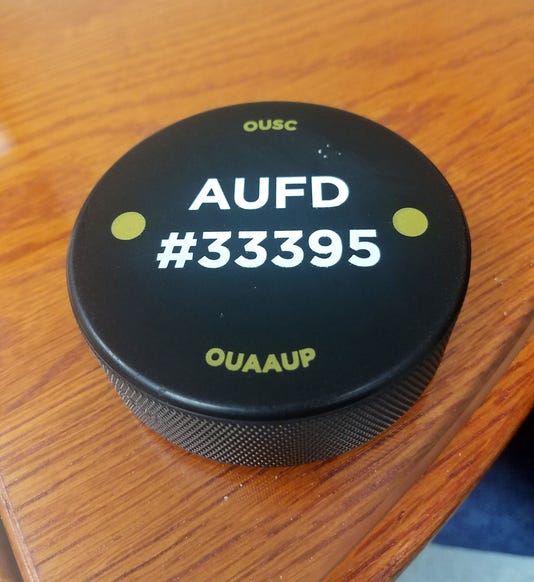 Is that a hockey puck in your pocket or are you just happy so see me?

To prepare for an active shooter, faculty and students at Oakland University in Rochester, Michigan, are arming themselves with hockey pucks.

The idea of using the quirky self-defense tool grew out of a training session that University Police Chief Mark Gordon led in March for faculty members on what they should do if a gunman enters their classroom.

A participant asked what people could bring to campus to be better prepared in case they need to fight back. The university has a no-weapons policy.

Gordon’s advice: Be ready to throw something — anything — that could distract a shooter, even a hockey puck, as a last resort if fleeing or hiding aren’t an option.

“It was just kind of a spur-of-the-moment idea that seemed to have some merit to it and it kind of caught on,” Gordon said.

Following up on the suggestion, Tom Discenna, a professor of communication and president of the faculty union, spearheaded an effort by the union to purchase 2,500 hockey pucks for 94 cents each — 800 for union members and another 1,700 for students. Distribution of the pucks on campus began earlier this month.

“It’s just the idea of having something, a reminder that you’re not powerless and you’re not helpless in the classroom,” Discenna said.

The little black discs have a dual purpose: They are also part of a campaign to raise funds to install interior locks on classroom doors. Some doors are only lockable from the hallway.

The pucks are imprinted with a number that people can enter on the university’s website to donate money toward the new locks.

“We know locking the classroom, in and of itself, is a big deterrent” to a shooter being able to enter the room, Gordon said.

The American Association of University Professors union has donated $5,000 toward new inside locks for the 37 classrooms in South Foundation Hall. The student government, Oakland University Student Congress, has made a donation in the same amount for new locks in an as-yet-to-be-determined building.

The student congress also recently ordered 1,000 hockey pucks that it intends to distribute to students.