Neighbors Ridicule PETA As It Says 1,000-Year-Old English Village Of Wool Should Be Renamed Vegan Wool 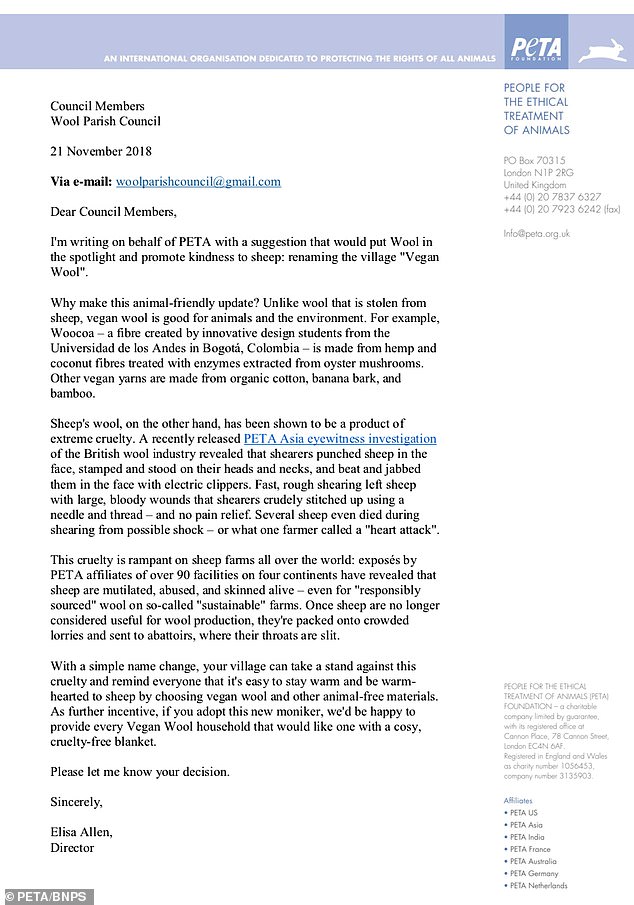 An animal rights group has been roundly mocked after suggesting the Dorset village of Wool change its name – as it currently ‘promotes cruelty to sheep’.

Instead PETA want the 1,000 year old village to be called ‘Vegan Wool’ – to the derision of residents.

Elisa Allen, a director at PETA, has written to Wool Parish Council with the ‘ridiculous’ request. She said the change in name would promote kindness to sheep.

The activist said they would give a ‘cruelty-free’ woollen blanket to all 2,000 households in the village if they agree to the suggestion.

PETA claim to have uncovered cruelty shown to sheep in the British wool industry that includes animals being punched in the face, trampled on and beaten with electric clippers.

Ms Allen said that the people of ‘Vegan Wool’ would show an act of kindness to sheep if they changed the name of the village.

Because PETA has made the suggestion in writing members of Wool Parish Council are obliged to list it on the agenda at their next meeting – but the matter is likely to be laughed out of the room.

Local councillor Cherry Brooks said: “It is a ridiculous request and it’s caused quite a stir in the village.

“A few people are quite offended but most people seem to find it amusing.

“The proposal will now need to be discussed at the next council meeting, which will be interesting.”

Mrs Brooks also accused PETA of getting its facts wrong on Wool as the village name is derived from the ancient word ‘welle’, a water spring, and has nothing to do with the wool industry.