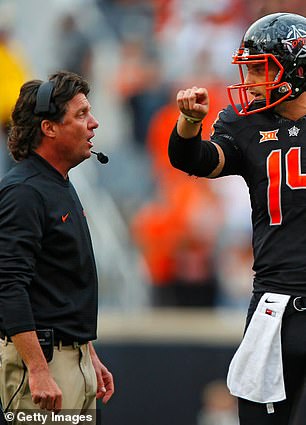 Speaking on Monday, at a news conference in Stillwater, Oklahoma, Gundy, was asked for his views on the increased frequency of college athletes transferring schools thanks to new rules brought in by the National Collegiate Athletic Association.

The question came on the back of Oklahoma State sophomore safety Thabo Mwaniki’s tweet, Sunday, that he would be transferring out of the school.

‘I think we live in a world where people are noncommittal,’ he said. ‘We allow liberalism to say, ‘Hey, I can really just do what I want and I don’t have to be really tough and fight through it.’

‘You see that with young people because it’s an option they’re given. We weren’t given that option when we were growing up. We were told what to do, we did it the right way, or you go figure it out on your own. In the world today, there’s a lot of entitlement.’

I’m a firm believer in the snowflake,’ he added.