Computer Algorithm Will Decide Whether A Democrat Unseats Republican In Maine 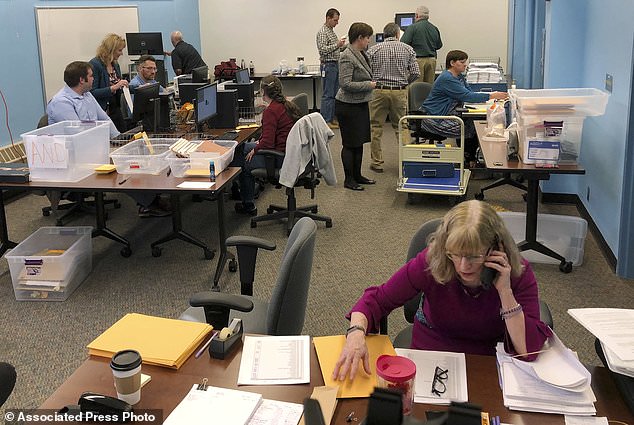 The election drew to a close last week in most places but not in fishing villages, potato farms and vast tracts of wilderness that comprise Maine’s 2nd Congressional District.

The four-way political battle won’t conclude until a computer algorithm has the final say this week on whether Republican Rep. Bruce Poliquin wins re-election or is ousted by Democratic state lawmaker Jared Golden.

It is one of 13 undecided House seats.

The new way of voting in which all candidates are ranked on a ballot made its national debut in U.S. House and Senate races in Maine.

Under the system, a candidate wins with a majority of first-place votes. If there’s no majority, the last-place candidate’s second-place votes are reallocated to remaining candidates. The computerized process can be repeated until there’s a winner.

Across the country, voting reform advocates are watching as the system faces its biggest test in the most expensive race in Maine history.

‘This will either fuel the adoption of ranked-choice voting in other jurisdictions, or it will stop it in its tracks,’ said Corey Cook, dean of the School of Public Service at Boise State University, who has studied 100 elections that used the system.

Maine residents approved the system in 2016 after nine of the previous 11 gubernatorial elections resulted in winners who failed to get a majority of the vote.

Proponents say the system allows people to vote for third-party or independent candidates without concern for political ‘spoilers’ or vote-splitting. They say it also moderates campaigns because candidates don’t want to alienate supporters of other candidates in the event they need second-place votes to reach a majority.

Critics say the ballot and system can be confusing to voters. They also say bland campaigns don’t allow candidates to differentiate themselves.

The system is sometimes referred to as an ‘instant runoff’ in the dozen or so municipalities where it’s used. But there’s nothing instant about the process in Maine. All of the ballots, more than 600,000 of them, had to be shipped to Augusta and scanned into a computer. That process continued over the weekend.