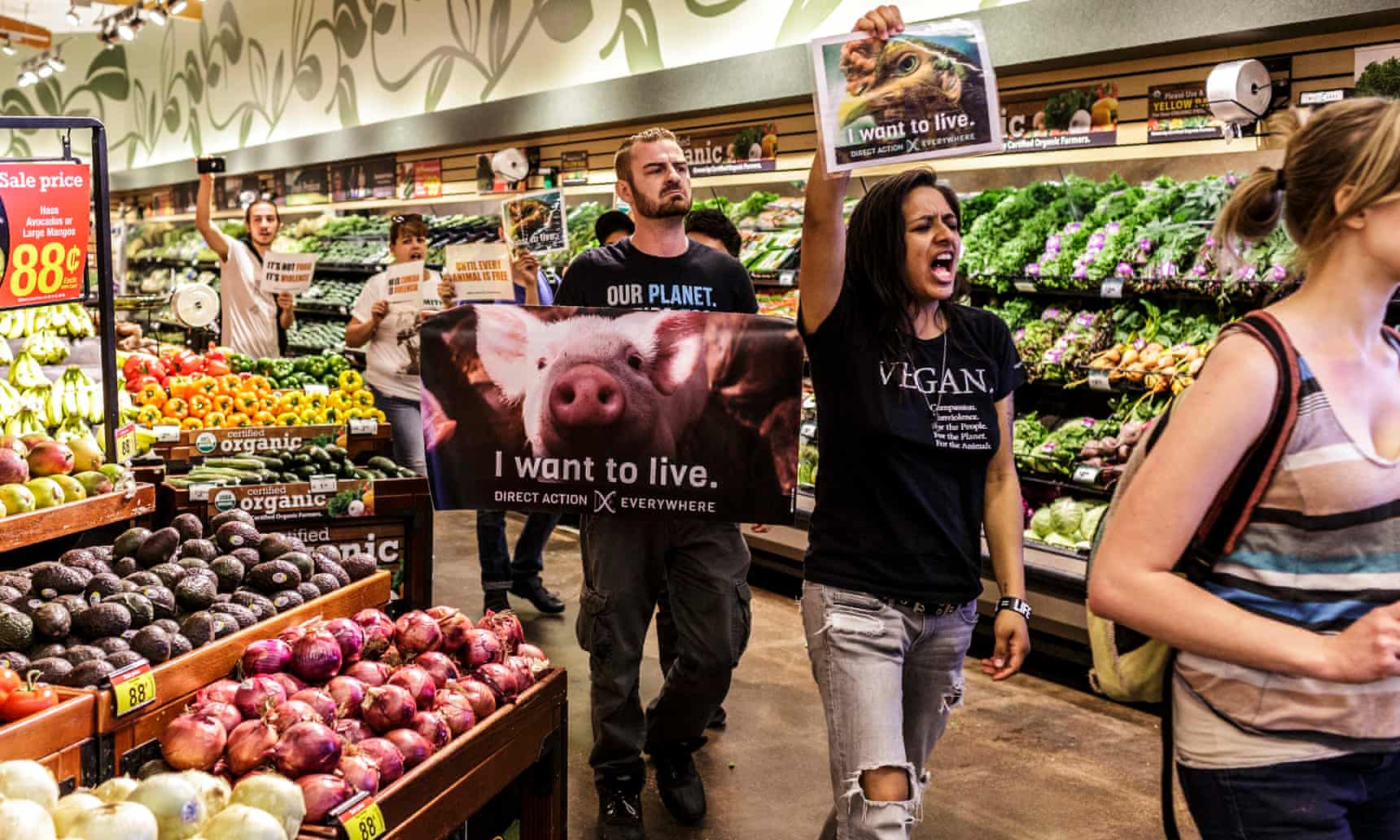 For a full week, a big black banner was posted from a sidewalk in Berkeley, California. “OCCUPY WHOLE FOODS”, it declared in large, white block letters.

But the protesters who created it, a group from the animal rights activist organization Direct Action Everywhere (DxE), were not actually able to do much occupying. Just days before a weeklong protest scheduled for late September, in which the activists had planned to call attention to alleged animal welfare violations by suppliers to Whole Foods’ parent company, Amazon, the Berkeley store filed a restraining order.

“We are not allowed to even step foot in the parking lot right now,” said Cassie King, a DxE organizer. “We can’t go inside the store and ask our questions.”

Early that week, the group sang, chanted and beat drums to attract customer attention from sidewalk. But on this quiet Friday afternoon, with the weeklong demonstration nearly over, a few members sat behind tables, megaphones facing down, waiting for interested passersby to approach them. King said they’d had some luck getting customers curious about their signs to walk over. But, when asked, a few different groups of people eating lunch outside the store didn’t seem to notice – or care – about what was happening beyond their parked cars. Without access to the inside of the store, it was harder for the demonstrators to get attention.

The restraining order marks the climax of a tense standoff between the vegan activist group, which advocates for “total animal liberation”, and the organic food giant. For the past several years, DxE has staged demonstrations at this Berkeley Whole Foods, calling for greater transparency in both Whole Foods and Amazon’s supply chain.

Whole Foods’ website describes rigorous welfare standards for all of its animal products, and the company has implemented a rating system to inform customers’ purchasing decisions.

According to Dena Jones, the director of the farm animal program for the Animal Welfare Institute, an animal rights organization that takes on factory farms around the world, the “organic” label regulated by the USDA does not necessarily guarantee high-levels of animal welfare, but Whole Foods bases their standards on a more rigorous evaluation.

“All suppliers of fresh meat, poultry and eggs to Whole Foods must be certified by Global Animal Partnership (GAP), which is a farm animal welfare rating program,” she wrote in an email. “On-farm inspections are conducted every 15 months to determine whether the farm is in compliance with GAP standards. Unlike the organic program, GAP standards are comprehensive and cover nearly all aspects of animal care.”

But the DxE co-founder, Wayne Hsiung, claims his organization is being silenced for exposing violations of the company’s standards. The group insists Whole Foods sells animal products from suppliers who keep chickens in crowded sheds, without access to outdoors, even when they are labeled free-range. This, they say, leads to feces-covered birds who don’t have access to enough food, water and sunshine.