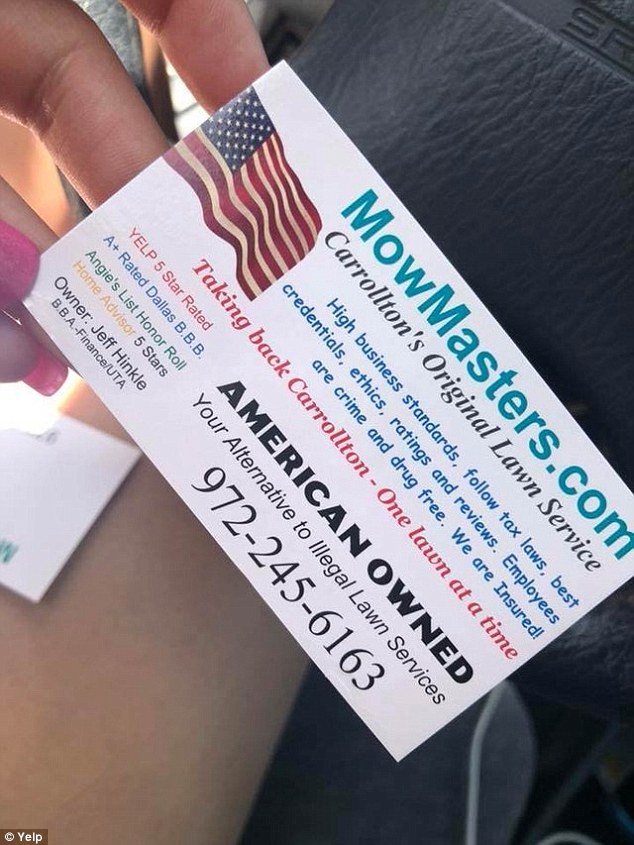 It’s called humor, look it up.

An ‘American Owned’ Texas lawn mowing company owner is being accused of racism after a business card surfaced, in which the company proclaims it is ‘Your Alternative to Illegal Lawn Services.’

Jeff Hinkle, owner of Mow Masters, located in Carrollton, Texas, felt the internet burn when one of his demo business cards surfaced and made the rounds on social media on July 18.

The text-heavy card featured an American flag along with the declaration, ‘High business standards, follow tax laws, best credentials, ethics, ratings and reviews.’ It also proclaimed that the company is ‘Taking back Carrollton – One lawn at a time’ and that its employees are ‘crime and drug free’ and that it is insured.

People upset by Hinkle’s apparent ‘racist, nativist, MAGA-inspired business card,’ as one Twitter user called it, were quick to express their views in reviews of the company.

‘Mow Masters is a racist company, trying to “get ahead” simply by the color of their skin. Disgusting,’ read one new Yelp review.

‘They left me an advertisement for their service that reads “Your Alternative to Illegal Lawn Services” and “Employees are crime free” which is a completely bigoted thing to advertise,’ another Yelp reviewer wrote.

Another Yelp reviewer wrote, ‘He’s using the same rhetoric as Trump to get people in Carrollton to switch over to his services because its “American made.”

Hinkle appeared to defend himself on Yelp, writing in response to several one-star reviews, ‘These reviews are grossly misinterpreted. This is not an attack on the Hispanic people. My deceased wife is Hispanic, my son is brown… This is about about economic! Giving customers a choice on who they what to hire! It’s so sad that you see racism every where you look and seek to destroy honest, law abiding, tax paying businesses. What do you hate America so much!’