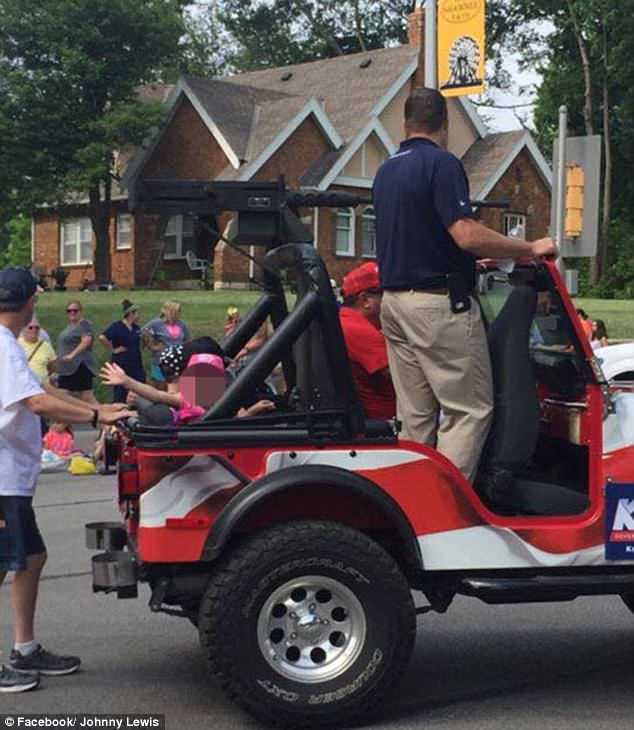 Suck it up, buttercups.

The secretary of state for Kansas has sparked outrage after he rode in a parade with a large replica gun mounted on the back of his American flag colored jeep.

Kris Kobach, who is also a Republican candidate for governor, shocked the crowd when he participated in the parade in the city of Shawnee on Saturday.

The sight of Kobach smiling and waving from the red, white and blue-decorated jeep drew audible gasps from some parade-goers as they spotted the large gun at the back of the vehicle.

Had a blast in the Old Shawnee Days Parade in this souped up jeep with a replica gun. Those who want to restrict the right to keep and bear arms are deeply misguided,’ Kobach tweeted alongside photos of him with the vehicle.

A spokesman for Kobach later confirmed the gun was only a replica.

But the city of Shawnee have since issued a statement apologizing to those who felt unsafe and promised not to allow something similar in future.

Many on social media were quick to slam Kobach over his gun display, saying it was inappropriate at a time of school shootings.

Shawnee Community Christian Church pastor Johnny Lewis said there were gasps from the families lining the streets as Kobach rode by in the parade.

My six year-old worries constantly about school shootings and endures intruder training at school in fear,’ Lewis wrote on Facebook.

‘Gubernatorial candidate/current Secretary of State, Kris Kobach, just drove through a crowd of children, including her, at the Old Shawnee Days parade in a Jeep with (I assume a fake but very real looking) huge mounted automatic weapon with visible ammunition rounds hanging from it and pointed at the crowd.

‘Why was that necessary sir? My child didn’t need that today. Don’t care what your position is on second amendment that is completely unnecessary.’

Kobach is a staunch supporter of gun rights and held a rally at the Kansas Capitol right when students staged walkout protests across the country for gun control.

‘Instead of walking out of class, why don’t you stay in class and spend that half hour studying the history of the Second Amendment?’ he said as the students participated in the walkout.