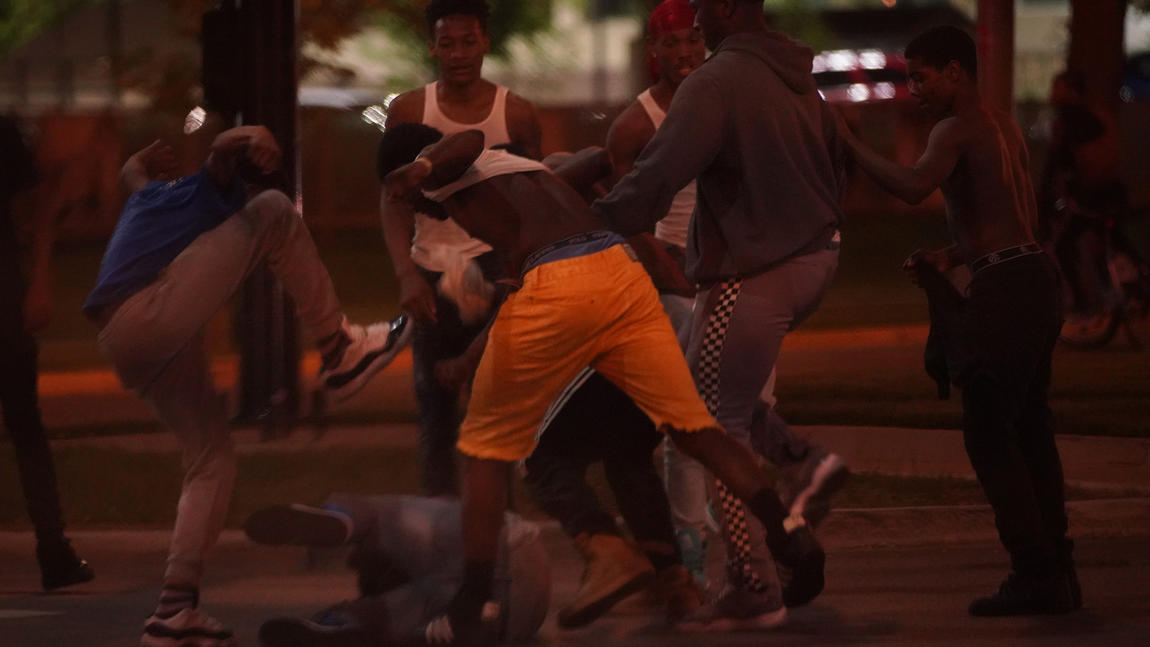 Marking the start of ‘Wilding’ season in Chicago.

The large group of teens had been wandering downtown and along the lake Sunday evening, but police decided it was time for the group to leave.

The teens, numbering more than 100 and some deemed “borderline criminal” by police, were first steered onto Red Line trains that ran express from the Gold Coast to the South Side. Then they were chased from 31st Street Beach and began running through traffic on King Drive.

As the teens approached 38th Street, eight or 10 of them knocked a 15-year-old boy to the ground.

“I didn’t do nothing,” the boy protested, guarding his head with his arms as a teen stood over him and swung left-right, left-right while others kicked his ribs and back, an attack witnessed by a Tribune reporter. They kicked his face, they stomped his head. They emptied his pockets, they took his shoes.

Finally a police lieutenant pulled up and stood over the boy while waiting for help.

Chicago police spent much of Memorial Day weekend tracking and chasing groups of teens through downtown for what often began as “borderline criminal behavior” and sometimes ended in vandalism and fights. Officers shut down beaches and parks early, and “directed” large groups of teens toward trains and buses.

The holiday weekend trained a spotlight on the Police Department’s delicate strategy of keeping the peace downtown and along the lakefront — areas heavily trafficked by tourists — without resorting to more arrests or other heavy-handed tactics.

“I know there were some questions about us forcing people to get on CTA buses and what I can tell you is this: We didn’t force anybody,” Chicago police Superintendent Eddie Johnson said Tuesday. “We directed people to different stops — it’s simply a public safety issue.”

“Who made that decision?” he said. “How were decisions made about who was going to be put on that train?”

Holiday weekends are traditionally more violent than other weekends in the summer, and the Police Department in recent years has turned to using overtime and canceling days off to put more officers on the street. This year, 1,300 more officers than usual were deployed.

Many of them were assigned downtown or detailed there from areas as far away as Morgan Park and Albany Park once supervisors realized they needed help. Officers descended on beaches and parks south of Fullerton Avenue, the downtown area that includes North Michigan Avenue and the South Loop.

All four nights of the holiday weekend, these extra patrols kept track of groups of teens as they arrived downtown on the Red Line and made their way to beaches and parks. Some lingered around Michigan Avenue or near CTA stations. The groups ranged in size from a few dozen to more than a hundred.

In one instance, teens damaged property at a Target store at Roosevelt Road and Clark Street, police said. There were reports of gunfire near the Bottled Blonde bar on Wells Street late Saturday, near LaSalle Drive and Ontario Street early Sunday and at Chicago Avenue and Lake Shore Drive early Monday. That night, officers reported people running from the sound of gunfire as crowds left North Avenue Beach.

“A lot of it is the nuisance that they’re doing. It’s part of what we get with teens,” Nagode said. “The resources it would take me to lock up 100 kids who were fighting would be tremendous, so we have to mitigate, stop the problem and do what’s necessary to make (everyone) safe.”