Shulman, who Democrats have been fond of saying was a Bush appointee, was, however, a DNC donor.

Perhaps even more instructive is the activity of Shulman’s wife, Susan L. Anderson. We previously reported that she was working for a liberal organization, Public Campaign, a group that was supposedly about campaign finance reform.

Turns out, she also was working for Organizing For America, the Obama political arm. OFA, of course, didn’t have to suffer IRS targeting, when it became an “independent” (cough-cough) organization (while still promoting Barack Obama), and applied for its exempt status.

En route to airport after working 3 days 4 OFA, MiL just asks me If I know abt the Chrysler ads 🙂 #Obama2012

She also tweeted, attacking Romney and raising the Harry Reid questioning of Romney’s taxes. Makes one wonder again about the “source” of Reid’s so-called information. When her husband was questioned during hearings, he claimed not to know how Reid came by any such information.

Romney in class by himself – see @sunfoundation charts comparing Romney’s tax returns to other presidents. bit.ly/LQegqf”

She tweeted notably against Karl Rove and his Crossroads group, urging her Twitter followers to protest them:

Crossroads has claimed that the IRS targeted them and leaked private information on their application:

“We filed for a 501(c)(4) status — and three years later, that process has not ended for us,” Rove tells Newsmax in an exclusive interview.

He said the group’s application may well be suspended by now, since it was among nine conservative organizations whose information was leaked to ProPublica, the liberal investigative website.

The groups’ applications had not yet been approved for nonprofit status. Releasing information on unapproved applicants is against IRS rules.

“This violated the law, and shortly thereafter we were told by the IRS that an investigation into the leaking of these documents was underway and that put our application into suspension for a while.”

He adds that, “we, frankly, aren’t surprised,” since Obama made a “thinly-veiled reference” to conservative groups like Crossroads in a 2010 speech as “a threat to democracy.”

At Larry Lessig teach-in @ #occupydc. Will intro him tonight on his new book on how big $ threatens our #republic @ GW Law #OWS

DC, good morning!Come down to the Mall and tell your 99% story! twitter.com/slandersonwdc/…

Anderson even tweeted a hit piece by Media Matters, which referred to complaints about the IRS targeting of Frank VanderSloot, a Romney donor, as “boohooing”. VanderSloot was singled out as “evil” when the Obama campaign put his name and the name of seven other Romney donors on a website, degrading them and their actions as possibly “questionable”. After that, VanderSloot suddenly found himself under investigation by multiple government entities.

She may have had her own visits to the White House and with the President, although obviously “Susan Anderson” is perhaps not an uncommon name: 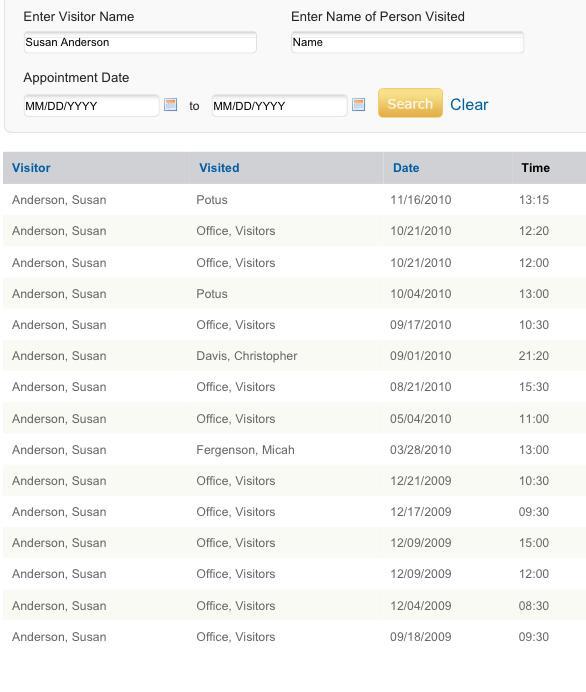 Among the 105 twitter accounts Anderson follows, she follows every typical progressive media/cause account, including Pro Publica, the group to whom the IRS is accused of having leaked private information about Crossroads. She also coincidentally follows all three of the liberal media we wrote about having a private meeting at the White House, and Nick Confessore, a political reporter for the NY Times, who wrote more favorable pieces essentially blaming the IRS troubles on “confusion” in the Cincinnati office and most recently, attacking the victims of the targeting, claiming they were involved in political activity (which, under the IRS guidelines, is allowed, to a degree).